The by-now well known 2012 design for the Type 26 had caused debate on this blog already from the release of the first, very short, video, when we noticed the two large doors for boats on a side of the superstructure, an uncommon arrangement that immediately caught the eye.

The suspect, that appears to be confirmed, albeit not officially, is that the mission bay of the frigate has been relocated amidship, into the superstructure, in an arrangement adjacent to the helicopter hangar.
This is probably due to the reduction in sizes of the vessel, which started as a well over 6000 tons giant of roughly 150 meters and went down to 5500 tons and 141 meters.
The difference might not seem dramatic at first, but it is very significant, and it is likely to have made complex, if not impossible, to fit a meaningful mission bay in the hull, under the flight deck. The presence of the mission bay in a shorter hull was likely to affect the design and push the flight deck up, an undesirable development that can affect rough-weather helicopter operations.
One of the most interesting designs proposed in the Future Surface Combatant history, the FC65 frigate, which was to be capable of over 35 knots of speed among other things, had a mission deck 40 meters long and 12 wide, with stern ramp, but the ship was around 150 meters long and 6600 tons. It is clear that, if the ship goes smaller, solutions have to be different.

So the Type 26 is now likely not to have a stern ramp for boats, but will instead probably fitted with the "grabber" arm used on the Type 45.


The mission bay in the superstructure is not a new concept either. It appeared already during the endless effort for the Future Surface Combatant programme, and was an important part of the Thales C2 concept and of the F2020 frigate design they showed in 2006/07.
Online, not much material is left of that stage and design proposal, but thankfully, the excellent Navy Matters website comes to our aid, and thanks to Richard Beedall's hard work, we still have this very interesting graphic:


This modular mission bay space, adjacent to the helicopter hangar, goes probably very close to the concept behind the current Type 26 design shown by BAE.

We can only estimate sizes of the reconfigurable space, and try to guess its configuration. From the BAE videos, knowing that the current Type 26 lenght is 141 meters, i've tried making a few rough estimates. 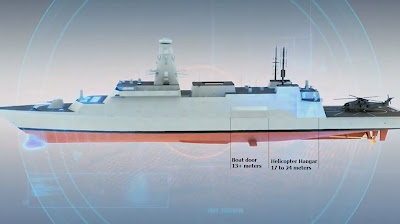 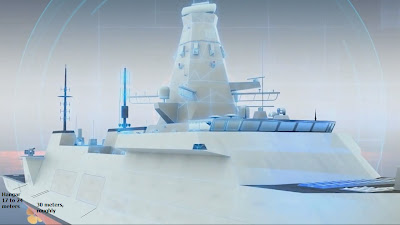 The mission bay is likely to be a prosecution of the hangar, and could stretch over 26 meters in lenght past it, at least on the starboard side, where there's two boat doors. On Port side, the bay could be shorter, and stop at 14 meters or so past the hangar. The presence of the funnel means that the mission bay is not full width for all its lenght, but for probably around 14 meters or so past the end of the hangar.
The hangar has probably two storage/maintenance areas to its sides, which can be considered part of the mission bay. I've drawn a quick sketch schematics to depict the (possible) general outline of this important part of the vessel.


Regarding the propulsion, barring dramatic changes that for now are not on the horizon, the CODLOG configuration seems by now the chosen path, with 4 High Speed Diesel engines connected to two electric motors driving the 2 shafts while cruising at up to 18 knots speed, with a single gas turbine in direct drive, used for sprints of speed over 26 knots.
I had been earlier wondering what gas turbine would eventually be fitted: WR-21 like on the Type 45, or MT30 like on CVF, LCS and Zumwalth DDG-1000?

According to Warship Technology, the answer is probably MT30: Rolls Royce is working on its top-class gas turbine to design a "compact" variant, which is seen as a leading contender for the propulsion of Type 26, in addition to being a Rolls Royce instrument for gaining an even greater foothold on the international market, beating General Electrics competition. The MT30 compact, in fact, is smaller (although over 30 tons in weight) and fits in the same spaces of the GE LM2500 turbine which powers ships such as the FREMM frigates: a clear attempt of Rolls Royce to further erode GE's market share.

Rolls Royce aims for export successes by qualifying the MT30 Compact to civilian standards so to avoid export regulations, particularly US ones. Japan and the US themselves, for the Arleigh Burke destroyers of the future Flight III and eventual future batches, are seen as possible customers.

The Type 26 could get a propulsion package with MTU high speed diesels and the Rolls Royce gas turbine, offering excellent performances and some commonality with the CVF's own propulsion plant.