Of Carriers, Obsolescence and Vulnerability


An aircraft carrier is a sovereign, mobile air base that ensures you can apply airpower at a point of your choosing. It ensures the fleet can have its own intimate air support, and its own timely air cover. It allows the surface fleet to launch its own quick reaction alert fighter jets and have its own CAPs to protect itself from enemy air attack.

Incidentally, allow me to say that one of the biggest mistakes the Royal Navy has made in the past was to refer to the carriers as “strike” carriers. That actually downplays the immense importance the carrier air wing plays in the survivability of a surface task group.

“Strike” is just one of the many missions of the Air Wing and is actually in some ways the least important one. Much (not all of it, but certainly much of it)  of the “strike” role could be carried out with Tomahawks or other ship and submarine-launched missiles, if you just funded enough VLS cells and missiles.

Air defence, reconnaissance, flexible close air support, anti-submarine warfare through the use of groups of helicopters, etcetera. These are the really defining roles of the carrier air wing. There are many alternative ways of putting 500 to 1000 lbs of explosive into a target, especially in the age of air to air refueling, drones and cruise missiles.
Put putting air defence patrols up above the fleet deployed far away from friendly shores? That definitely requires the carrier. You can’t sustain any sizeable air umbrella for any meaningful amount of time by trailing fighter jets thousands of miles via air to air refueling.

The aircraft carrier enables you to do that, because it is a fighter jets base that you can position as needed. As such, it can only ever become truly obsolete if A) jets themselves are obsolete and no longer needed. Already in the 50s the UK imagined a world where aircraft would become almost pointless because of missiles. It was wildly wrong at the time, and still is in many ways, but maybe a combination of drones and missiles will indeed take the place of jets one day. Not today, nor tomorrow, though.

Option B is that jets somehow grown such combat endurance and range that you can launch them from home and have them reliably and persistently overhead out at sea, or anyway at a great distance from a friendly air base. This is still technically unfeasible and it will be so for many, many more years.

Is the carrier vulnerable? Yes, it is relatively fragile. It is a ship. It has very little available estate, no matter how large it is, and that makes it difficult to work around battle damage. If the flight deck is damaged, you can’t simply fill up the crater with dirt and plate it up with AM-2 mat like you’d do on land. And if enough holes are opened in the hull, it will inexorably sunk. That’s the reality of being a ship. But that’s nothing new, and shouldn't be blown out of proportion either, because finding an aircraft carrier at sea and then assaulting it successfully, going through the various layers of its defences, remains actually a very challenging task.

Whenever you say the aircraft carrier is “too vulnerable”, what you are actually implying is not the obsolescence of the carrier, but the fact you don't trust your AAW and ASW capabilities.
From a purely british point of view, the aircraft carrier is surrounded by Phalanx CIWS, Aster missiles from the Type 45 and Sea Ceptor from Type 23, 26 and 31.
Add the embarked jets supplying air defence, and the carrier is literally the best defended place in the whole of the UK and its armed forces.

In comparison, Land forces and land airbases have access to just a few STARSTREAK and Land Ceptor missiles (replacement from Rapier, coming into service beginning in the new year).
If you feel you can’t protect the aircraft carrier from “drones”, it is not a carrier problem. It is a forces-wide problem, because it means other ships, the army and the RAF jets when on the ground are all even more vulnerable.
Clearly, your problem is not the carrier being “obsolete”, but your air defences. 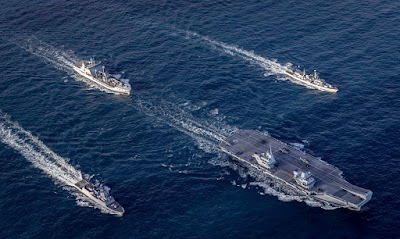 Naturally, the carrier is exposed to submarine threats which are particularly scary. An air base on land, no. Then again, the land base is subject to a whole lot of other threats, including lack of host country authorizations and cooperation, protests, disruptions of the supply routes and potentially indirect fire at all levels (from ballistic missiles down to mortars and rockets). Airbases on land can also be assaulted by suicidal attackers with various tactics.
There is a reason why the RAF continues to integrate the equivalent of 2 infantry battalions in the form of 6 RAF Regiment Squadrons for Force Protection. Without expanding beyond the last decade alone, we have witnessed the Taliban attack on Camp Bastion, repeated disasters in Pakistani airbases stormed by terrorists and various attacks in Syria which are all good examples of additional threats to land bases.
A base on land cannot sink, but it remains very vulnerable to disruption and, moreover, any aircraft when parked on the ground is very fragile.
A swarm of UAVs cannot sink an air base ashore, but it can put it out of commission all the same, and destroy the aircraft on the ground with relative ease.
Yet nobody would argue that the airfield is "obsolete". You'd argue, correctly, that better defences are required.

The submarine threat is perhaps the most terrifying of all, but if you don’t think you can keep the aircraft carrier safe, the implication is that surface operations as a whole are doomed to failure, because nothing else will be as well defended.
Again, it implies you don’t trust your ASW technology, tactics and resources as a whole to be up to the task. If this is the case, the problem is not the carrier, or at least definitely not limited to it. 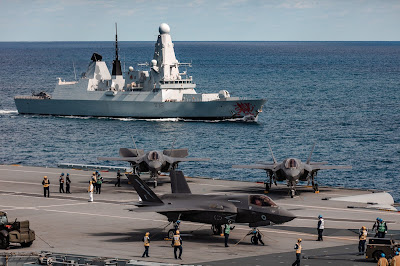 Ultimately, if the carrier was not there with its jets and helicopters, both your AAW and ASW instantaneously gets even weaker. Maybe the fleet will still have access to Airborne Early Warning (the one saving grace of having helicopter-borne AEW is that it can work from pretty much any ship at all), but it will no longer enjoy intimate air support. It’ll have to restrict its movements to where land-based airpower can provide sufficient cover. 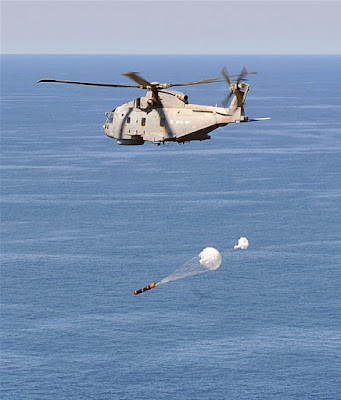 Remove the ASW helicopters embarked on the carrier, and your ASW defences are also immediately weakened.

Threats are getting more difficult to counter, that’s undeniable, but the war between the “sword” and the “shield” is as old as war itself.
It is not the carrier that you are calling into question if you believe you can’t defend against the enemy “swords”. It is your “shields”.