The UK Armed Forces face a wide variety of aerial threats, with variables that include speed, stealth, and flight profiles. Attack helicopters can have a speed of zero, for instance, while some anti-ship missiles can exceed Mach 3. Air-to-air practice targets for RAF aircraft have a very different profile than wave-skimming anti-ship missiles. Consider, too, the difference in regulations and safety procedures: an aerial target’s rocket-assisted takeoff may require environmental waivers on land, but ship launches turn it into a safety issue.
The approach up to 2006 had been for individual services to buy individual target drones, but the results weren’t entirely satisfactory. Could the UK’s emerging approach of long-term public-private partnership for government service delivery be used to provide an overlapping set of targets that would meet the needs of all 3 services? It was a risk; both the solution’s definition and its mode of delivery were new, and hence relatively untested. At the same time, it was an attractive idea.
The process to make that idea a reality began in September 2001.
Finally, Qinetiq was contracted on 14 December 2006 to establish the Combined Aerial Target Service (CATS) for air defence training and test and evaluation for the UK's armed forces over the next 20 years. The contract value for the 20 years reaching 2026 is 308 million pounds. QinetiQ already managed and operated the MOD's 22 principal test and evaluation ranges through the 25-year LTPA, awarded in 2003.
Under CATS, QinetiQ provides all of the UK MOD's aerial target requirements. When the contract was signed, it was already providing the aerial target service at the airport of Aberporth, South Wales as part of the Long Term Partnering Agreement (LTPA) [a 25 years deal worth 915 millions] and which became a significant part of the new CATS contract. With CATS, QinetiQ received the single-supplier responsibility of providing a service for ground-based air defence training, aerial target services for the Royal Navy, and an air-to-air service for the RAF. The service is capable of operating from any suitable range worldwide, and has been expanded, post-2006, to include several different kind of targets to enhance the training effectiveness. The targets are transported and deployed whenever live-firing training is to be staged, from BATUS to the Falklands to Aberporth and UK waters for FOST training of the Navy.
Mirach 100/5 targets from Selex Galileo Avionica based on Aberporth provide the RAF with targets for live fire training.
Meggitt Defence Systems' Banshee targets, which will now be operated by QinetiQ, are also fully integrated at UK ranges in Manorbier, Aberporth and the Hebrides. The Meggitt Voodoo intermediate target and helicopter pop-up target complete the suite of targets that comprise the total service.


The British military does have a requirement for supersonic aerial target services, and QinetiQ may have to add a supersonic target to its team during the 20-year contract. Various options are available, including Orbital Science’s GQM-163 Coyote SSST used by the U.S. Navy, and under evaluation by France, which would like to finally test for real the Aster 30 missile by shooting down this supersonic drone. The british requirement is the same, and a collaborative approach might not be a dumb idea, nor an impossible scenario in the new climate of "share it or lose it".
It is to be noted that, on 20 March 2007, France ordered ONE Coyote, support equipment, spare parts, technical data, and technical assistance  under the Foreign Military Sales Program. The order totaled a cost of 9.2 million dollars, and was targeted at "supporting the validation of a French weapons system".
Exactly which system was not specified, but it has always been believed that it was Aster 30. The launch was planned for late 2009, but so far nothing has happened: it is not clear what the status of the programme is. It might only have suffered delays (the Aster troubles that had to be fixed, perhaps delays in the work on the Coyote itself, since 18% of the work on it was to be done in France [cannot buy it ready from the americans without hurting their Grandeur, after all!]) or have been cancelled. At some point, though, we might see Aster 30 facing the real trial, in the future.
The Drones
Mirach 100/5
The Italian built Mirach 100/5 has a maximum cruising speed of 530 knots and can sea-skim at 520 knots. It can fly as low as 10 feet above sea level and as high as 40,000 feet.
This exceptional multi-role threat simulation system includes a state of the art Aerial Target and modern Ground Control Station plus a wide selection of mission payloads able to qualify and exercise all required weapon systems. From Aberforth, this drone provides the RAF fighters with targets for ASRAAM, Sidewinder and AMRAAM missiles. 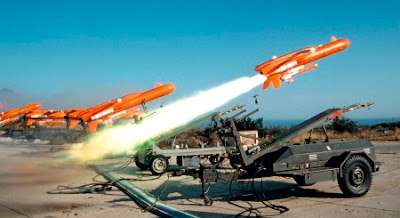 It is used by the Royal Navy via Naval Air Service squadron 792, which controls them during live firing training of weapons such as Sea Dart and, now, Sea Viper. Both HMS Dauntless and HMS Daring have already had the honor of taking down one each of these drones.
Meggitt Banshee
One of the world's most popular small piston-powered target drones is the British Meggitt Defence Systems (originally Target Technology LTD) "Banshee". The Banshee was first flown in 1983. It is a small delta-winged drone, made mostly of plastic, with a pusher prop and powered by a small rotary engine. It floats, allowing recovery at sea. 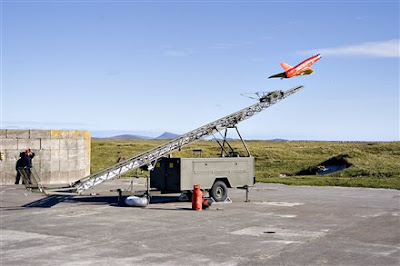