Press reports suggest that the RAF is again urging an early split buy for the F-35 programme, with the number of F-35Bs curtailed in favor of land-based F-35A.
The idea is unworkable and highly damaging, and represent the fastest way to turn the carriers into literally wasted money by not having enough squadrons to ever fill up one.

It takes a minimum of 4 (and arguably 5) squadrons to be able to deploy a full one enduringly on a long term operation. And it would take 3 full squadrons of 12 aircraft just to fill up one carrier (forget about filling two at once, that was never going to happen).

Current F-35 plan is for 4 frontline sqns, we were told last year, plus OCU and OEU. And in fact, there is no manpower for more unless the services grow or Typhoon squadrons move to F-35.
So there is literally no room for a split buy. Unless the UK turns the carriers into a complete waste of money by literally not having the sqns to fill up one. 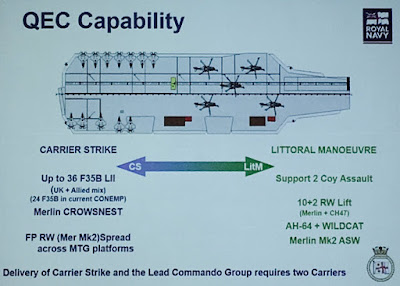 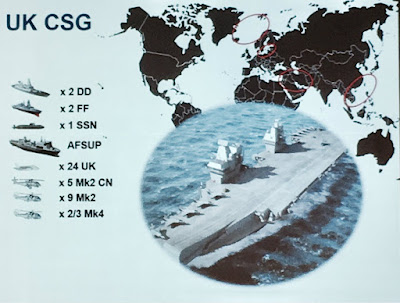 138 aircraft are arguably too many for 4 sqns, but too few for a split fleet of any relevance if we accept a minimum requirement of 4 B Sqns plus an adequate training and sustainment fleet behind them. To have a long-term sustainable F-35A force, you'd need another 4-5 squadrons, and you are never going to have money and men for those unless Typhoon goes. Considering current squadron numbers, it is already evident that the two SDSR 2015's "additional Typhoon Tranche 1 Sqns" are placeholders for F-35 3rd and 4th squadrons.

Looking at planned peak Typhoon usage (assuming a 7 squadrons fleet, or even a 8 sqns one), from 160 purchased aircraft, the UK bought 20 to 22.8 aircraft per frontline squadron. The extra aircraft cover training and attrition and sustainment. Applying the same ratio to 138 F-35 suggests an achievable fleet of 6 to 6.9 frontline squadrons. Then again, we should keep in mind that in recent years no RAF squadron has ever actually developed a deployable strenght of 12 aircraft, while F-35 squadrons, supposedly, will have to. This requires larger squadron allocations of aircraft. Even if the F-35 ever grows to 6 squadrons (hard to say, as we have literally no idea over how many years government proposes to spread the 138 purchases), the question will still be, should we go for 4 + 2 or 6 of the same type? I'd still tend to say 6 of the same type give you a better deployable output. Gives you a comfortable 1 in 5 ratio for enduring ops and some space for reinforcements / another small, temporary operation elsewhere. 2 squadrons give you a very limited output. Not terribly much unless you come up with a very specific role for them. SEAD by buying AARGM ER, the one weapon i'd really like the UK to get and carry internally for obvious reasons. But that is all in a distant future, with too many SDSRs in the way. Now and for probably all of the 2020s, nothing should distract the programme offices from aiming for at least four B squadrons. Then, after that, there might or might not be space for more and different variant, depending on how Typhoon will be doing. Typhoon and FCAS, too often forgotten in this discussion.

The RAF is working on FCAS, an unmanned combat aircraft for the 2030s, and while the UCAVs have no pilot on board, we all know that UAVs squadrons are actually very manpower intensive, as multiple shifts of crew are needed on the ground to cover the very long missions, which can last from a minimum of 12 hours (with a loaded up Reaper) to, in future, well over a day with Protector. FCAS will not be exactly lean-manned, even expecting greater automation to be part of its capabilities.
So, i really don't see where the room for an F-35A fleet is. A split fleet of 2 squadrons and 2 squadrons would be a disaster: neither of the two would be large enough to be truly relevant.

Near future plans, beginning with first additional Typhoon Sqn build up in 2018


Typhoon grow to 7 / 8 Sqns (the RAF apparently wants 3 additional Sqns, even though initial post SDSR reports were for 2. The third is subject to feasibility)


See how the overall number of Sqns remains, essentially, unchanged. The additional Typhoon Sqns and then 809 Sqn on F-35B in the early 2020s essentially absorb the manpower released by the demise of Tornado.
It is easy to see that the additional Typhoon squadrons are effectively placeholders for the 3rd and 4th F-35 squadrons to be built up in the late 2020s.
The aim is to continue hovering at around 9 / 10 fast jet squadrons. It is hard to see how more sqns could ever be formed without an (unlikely) growth of the services in terms of manpower (and budget).

Unless the number of A squadrons to be created 1) does not impact the construction of a sustainable and effective B fleet and 2) comes with a realistic and useful number of squadrons, i'd always recommend additional F-35B squadron(s) rather than splitting the fleet.
A small number of F-35A squadrons are not in the UK's interest in the current and foreseable force structure, especially considering that:
1) The UK has literally no weapon, in service or planned, which could give a sense to the A's slightly larger weapon bay. The weapons either fit the B or are too large to fit even the A. We can fill our mouths with speculation about new weaponry to fit in the larger bay, but there is no evidence of anything of the sort, nor any evidence of a real need to pursue such weapons.

2) The UK is not equipped to air-refuel F-35A. While probes for the F-35A are a possibility, so far nobody has actually paid for them and requested them, having Booms on the tankers instead. Arguably, the UK too should go for the boom on Voyager rather than the probe for F-35A, considering the boom would also benefit Rivet Joint, P-8, C-17 and allies. Either option has a cost that eats into any saving enabled by the A being cheaper than the B. As does having two logistic and training lines, even though they are closely related and partially overlapping.

3) An additional small fleet below "critical mass" is essentially a part-time tool, or a full-time tool at small number of deployable airframes (well below Sqn level). Not very helpful. An additional Sqn of the same type can actually affect the number of force elements at readiness a lot more. I'd rather have more deployable F-35Bs, even with their slightly shorter range, than two fleets locked in a fratricide battle for insufficient manpower and money.