"After the Wall Came Down": a journey through decades of constant change 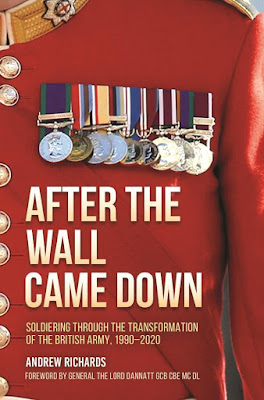 Andrew Richards retired from the Army in 2002, but the Army never really leaves you. It is an experience that inevitably leaves memories, some of which dear, some less so. And so, keeping in touch with other soldiers and friends made during Service, and following the events of the last two decades, he has come to realize that the British Army has, truly, gone through a period of change the like of which was never seen before.
In his book, aptly titled “After the Wall came down”, he leads us on a journey through these decades of frenetic action and constant change, thanks to interviews to dozens of soldiers from across every Corps. It is a journey that begins in the last few years of what was, overall, a period of strategic and organizational stability with little precedent in history. Between 1945 and the fall of the Berlin Wall, despite the progression of technology, the Army was largely the same. Successive intakes of soldiers were instinctively familiar with an organization that had enjoyed a long period of stability and carried on in its traditions. And so in the 1980s the reasons to join were often reasons of true loyalty to the historical regiment your family had served into in generations past. It was a matter of pride and adventure, especially as the campaign to retake the Falklands focused and galvanized the Country’s interest in the Armed Forces.
The rhythm of change has become faster and faster since the late 80s. The bullying scandals of 1987 were a major drive for change in some of the Army’s ancient ways, but the focus on more or less improper “initiations” and bullying of rookies nonetheless pale in front of everything that followed. With the dramatic reduction in size and the restructuring of the Army’s very fabric with “Options for Change” and the hunt for the Peace Dividend afforded by the sudden fall of the Soviet Union begin a spiraling series of new wars, new scandals, budget cuts, constant reorganizations and a race to keep pace with a changing society.
The Gulf War of 1991 is followed not just by the shock of 1994 as redundancies hit hard, severing many of those historic ties between families, counties and Regiments, as 50 infantry battalions turn to 38 and the proud Cavalry and RAC are hit just as hard between disbandment and amalgamations that changed the Army’s cosmos forever. The aftermath of the Iraq war is also the impact with the “Gulf War Syndrome” and with the mental scars of that experience, which have taken a long time to be understood and accepted rather than belittled and frowned upon.
The experience of peacekeeping in Bosnia comes across as another shock to the system, as the reality of the thankless, dangerous job of trying to prevent genocides while being restricted by Rules of Engagement sinks in. The experiences of The Cheshires of Lieutenant Colonel Bob Stewart, and the reportages from burnt, deserted villages of Martin Bell for the BBC put the Country, and not just the Army, in front of the shock of the worst war crimes since the Holocaust perpetrated by Nazi Germany, and the failure of the UN and of the international community to put a timely stop to the atrocities.
The Army at the same time has to deal with war at home in the 38 years of Operation BANNER, and soldiers faced for many more years, and still face, the shock of being hounded for alleged crimes while hundreds of convicted terrorists have been given an easy way out as a price to pay for the Belfast agreement. Afghanistan and Iraq loom large in the 2000s, with all their implications, from the shameful failure of the “mobile coffins” kept on the frontline for far too long despite their inadequacies in a world of mines and Improvised Explosive Devices to new cuts and downsizings in the middle of such a demanding campaign.
And still, in the middle of it all there are the Commission for Racial Equality and the transformation of the army in an inclusive force, opening up the door for minorities that for many years were concentrated away in a few specific regiments, and subject to undeniable discrimination. The long march of change touched the Service of homosexual personnel as well, and in parallel there is the long process of opening up the Army to women. From the disbandment of the Women’s Royal Army Corps in 1992 and the full integration of women in non-combat roles, all the way to the announcement in the recent 2018 that all combat roles will also be open.
Even so, much remains to be done for example to eliminate the stigma and coldness that faces too many soldiers suffering from PTSD who feel that they have been left along to walk out of the door, forgotten and ignored. And a common theme is the burden that Army life places on families: a burden that can unite even further, but can also in many times be destructive.
The last few decades have been a frenetic succession of change and upheavals. Yet, the author finds that many, indeed most of the soldiers he asks the question to, say that they would join all over again if given the chance. Even those who choose not to answer, or those who are adamant that they would not, tend to have at least some form of special, deep bond that the Army experience generated.
This book tries to show why.
For more info: https://www.casematepublishing.co.uk/after-the-wall-came-down.html
Pubblicato da Gabriele a 8:17 AM No comments: