The Joint Combat Aircraft (previously Future Joint Combat Aircraft) was originally intended to replace Sea Harrier in the Fleet Air Arm, and Harriers in the RAF. It selected the Joint Strike Fighter F35 as preferred solution in 2001, but for a long time never never really decided between STOVL and CV variants. The JCA programme has been heavily influenced by events connected to the Joint Harrier Force and, even more, it has been shaped partially by the Future Offensive Air System (Tornado replacement programme targeted at delivering a Deep Penetration Strike aicraft) programme of the RAF.
In particular, JCA has been ultimately shaped by the killing of the FOAS programme, which put the RAF to terms with the truth: JCA would not just replace the Harrier, but the Tornado GR4 as well.

The F35 Joint Strike Fighter is a plane affected by some of the most demanding requirements and most ambitious objectives ever conceived. The plane had to be stealth, have a Carrier, a STOVL and air force variant with 90% commonality between the three, had to be affordable, and had to replace a massive array of successful and very different airplanes.

When we look at the Joint Strike Fighter, in fact, we see that it is supposed to replace planes such as F16, F18 (partially), A10 (again, partially, as the Warthog has in the years gained such a consideration thanks to its effectiveness that it is hard to see its retirement happening anytime soon), Harrier AV8B +. In the UK it was to replace the Harrier, but with the death of FOAS and the first operational UCAV expected not before 2030 it is now going to replace Tornado GR4 as well. In Italy it is to replace the Tornado, the Harrier AV8B + and the AMX.
Not an easy task at all!

Ambitious targets have been set also in terms of training (no twin-seat variant, Operational Conversion to type expected to be done mainly via simulators) and maintenance. To give an idea of how challenging the requirements in this field are, we have to consider that the AESA radar aerial is reportedly sealed, and will not require maintenance at all during its life, as its many modules will allow for a "graceful degradation" that does not affect performances during service.
With the F35, it is expected that Scheduled Maintenance periods will vanish: the plan is that the plane will "tell" to the technicians when it needs support and repairs and what it needs, thanks to its advanced Prognostic and Health Management System. 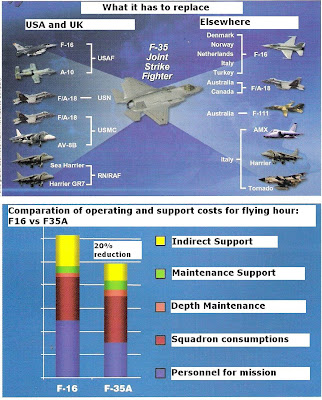 The F35 is asked to deliver a 20% reduction in support and maintenance needs (particularly about support personnel) compared to the F16, which notoriously isn't a maintenance-hungry machine to start with.

The F35 is not ambitious only in terms of kinetic performances. An F35 will spend most of its flying life not exceeding Mach 1.2 and 3 G (that are the Combat Mach limits), and its top performance is a rather uninpressive Mach 1.6. Turning rate and  Specific Excess Power are also far from impressive, since the engine it uses its very powerful, but it is a lone engine pushing a very heavy plane!

Its avionics are top class, and its range is also very good (and might improve, as in Israel the industry has already announced the design of a conformal fuel tank F35-compatible, to answer to the IDF requirement for the expansion of the range of their F35A) but the Joint Strike Fighter is not a real fighter. It is a Strike plane, with better AA capability than a Tornado.

Overall, this is probably not a bad thing: today, "Air Dominance Fighters" such as the F22, targeted almost exclusively to the dog fighting and air supremacy, make little to no sense, as the reality is that planes such as the Typhoon will spend most of their time chasing surface targets.


It is unclear if the integration contract for Paveway IV for the UK includes external pylons or if it is limited to the inner weapon bays. Integration of weaponry, anyway, will be done in phases, as with all airplanes. The inner underwing pylons, capable of 5000 pounds each, will be used by UK F35C for Storm Shadow missiles. The integration of Storm Shadow was to be done from the start, but it is understood that in 2005 the UK delayed this measure to save money. (Typical labour fudging, already seen with other programmes, up to CVF itself…)
The two weapon bays include two pylons each, two on the doors for AA missiles, and 2 pylons for both AA and AG loads. The F35C can carry up to 4 AMRAAM internally (the RAF did not show great enthusiasm for the idea of fitting Meteor to JCA in the past years. Being evil as I am, I suspect that this is because they did not want to give the Fleet Air Arm such capabilities. However, now that there will be no FOAS and the JCA is the only fighter the RAF will get other than Typhoon, a Meteor requirement will undoubtedly be issued in due time), but a likely interim stealth fighter configuration for the RAF is 2 AMRAAMs on the AG pylons and 2 ASRAAMs on the AA pylons. As it stands, ASRAAM will not be cleared for carriage on the inner AG pylons: original plan was to ask for integration and have a possible load of 4 ASRAAM all carried internally, but this was later changed to 2 inside and 2 outside. It is admittedly difficult to imagine a situation in which you’d want to send out a F35 armed with 4 ASRAAMs carried internally, after all…
A centerline underfuselage pylon exists, cleared for 1000 pounds. This will be used on F35B and F35C to carry a missionized gunpod. Only the F35A could fit the gun internally, as it was discovered during design and development. The F35 will use a purposefully-designed version of the GAU-12 Equalizer gun used on AV8B Harriers. The same gun, ironically, redesigned by ADEN, was to equip the UK Harrier GR9, but as we know it never worked.
The F35 variant is named GAU-22A, and maintains the caliber 25 x 237 mm NATO, but drops one barrel as a weight saving measure, going from 5 to 4. It gains an additional 1.4 milliradians radius accuracy in the process, according to tests. Firing rate goes down to 3300 rounds per minute, and the gunpod will include 225 rounds. The F35A will have 182.