The Good, the Bad and the Ugly of the BOXER purchase

Details of the variants of Boxer currently on order by quantity can be found in the table below. The Department is looking to enhance and uplift the size of the total UK Boxer order as we work to implement the Integrated Review. This may include new variants and partnering opportunities with industry and our Allies.

First, the Good: the Minister gives up new hopes that an expansion of the order might still happen. For a while, MOD talk had pretty much killed off any hope in this sense, but the answer is pretty univocal in suggesting that there will be adjustments. 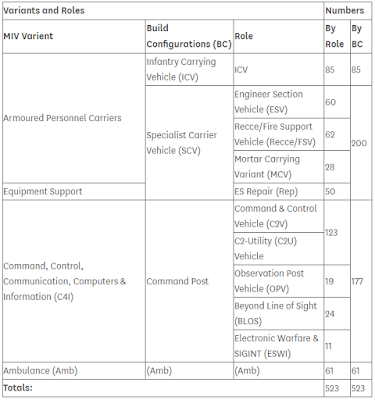 The list offers many surprises because so far we had been given very little reason to believe there would be such a wide range of sub-variants. An Engineer Section vehicle was expected, but nothing had so far been heard about a Mortar Carrying vehicle. A Repair sub-variant is also an interesting semi-surprise.

It is interesting to note that the “Command Post” is expected to come in a significant number of sub-variants as well, including OPV (a surprisingly old fashioned definition) for Fires direction; an Electronic Warfare & SIGINT sub-variant and a BLOS comms carrier.

The inclusion of these sub-variants is, for the most part, Good. How good, we will only know when the effective mission fit becomes known. The mortar carrying vehicle, for example: will it an APC giving mobility to a L16 81mm mortar team? Will it at least have a turntable and roof port for firing from inside the vehicle, or not even that…? Or maybe there is scope to finally adopt a turreted, heavy mortar…? Unlikely, but it would be a great capability boost and, for the moment, we just don’t know what might or might not happen.

The “Recce / Fire Support Vehicle” is probably the APC “up-gunned” with JAVELIN on the RWS. Around 50 such enhanced fits were expected, and the removal from service of WARRIOR has given new impetus to attempts to further improve the otherwise pretty dismal firepower of MIV.

A notable aspect is that several of these sub-variants will bring entirely new capabilities that the BOXER family, at present, does not offer. The development of the relevant modules should happen in the UK, according to know commercial agreements, and there could be some genuine export potential as well, if the resulting product is valid.

The Bad is undoubtedly the tiny number of Infantry Carriers, an incomprehensible 85. Even assuming the Fire Support Vehicle is effectively an upgunned infantry carrier despite being counted in with the “Specialists”, the combined number of 147 vehicles is still insufficient to equip 4 infantry battalions.

They are numbers more appropriate to just 2 battalions… which is what Army 2020 Refine needed, since the plan specifically called for the ability to deploy only one of the 2 STRIKE brigades at a time. 1 Brigade, 2 battalions.

Indeed, this might be the explanation for the tiny number of ICVs in the order.

The loss of WARRIOR means that such a plan no longer makes any sense, and adjustements are indispensable.

And this leads us straight to the Ugly side of this list: the overlap / confliction with AJAX.

Until a short time ago, the UK was of course planning to equip 2 armoured brigades and 2 STRIKE brigades on top. Although AJAX itself was going to be in the STRIKE Brigades for the most part, it appears clear that the support variants of the family (ARGUS for the engineers, ATHENA command posts, ARES, APOLLO, ATLAS) were primarily destined to units aligned with the tracked, armoured brigades.

Now, however, there will only be 2 heavy mechanized Brigade Combat Teams in total, with the other two BCTs being Light Role. Clearly, you are not going to put the engineers in BOXERs while the infantry of the brigade moves, at best, in FOXHOUND with JACKAL for fire support.

This means, effectively, that the 52 ARGUS and the 60 BOXER Engineer Section Vehicles are now virtually overlapping directly, as there are only 2 Engineer regiments of this weight class to re-equip, not 4. The OPV variant, similarly, is increasingly overlapping with the number of AJAX to be kitted for Joint Fires direction.

The sum of 112 ATHENA command posts and 123 between BOXER command posts and command-utility vehicles also leads to a frankly absurd situation in which the UK will have a Command Post vehicle virtually for every single Infantry Carrying vehicle in service army-wide (up to 147 BOXER, as discussed earlier, plus 93 ARES, vs 112 + 123 command posts). A 1:1 ratio is clearly insane.

I think it unavoidable that this overlap will need correcting, somehow.

We have all been following with increasing despair and rage the embarrassing situation of AJAX and it is hard not to muse about the implications of these sub-variants. if there are only two “heavy” regiments to equip, you suddenly only need one of the two sub-fleets, not both. In practice, if AJAX was to be cancelled, the loss of ARGUS would not be an immediate issue.

A more optimistic way of looking at it is that, if AJAX survives and the BOXER sub-variants are acquired in these numbers,  the Army then “only” needs to procure more Infantry Carriers to get back in a position in which it can properly mechanize all 4 Brigade Combat Teams. The 2 armoured brigades would keep the AJAX-based support variants, for obvious reasons, while the “Light BCTs” could be progressively uplifted with BOXER to become fully-wheeled formations.

Third option: the current balance of variants and sub-variants is modified, drastically reducing the number of BOXERs to be used as “Command Posts” and Engineer Section Vehicles, in favor of more ICVs / FSVs.

Judging from the list, an increase in the number of ICVs is both urgent and unavoidable. What’s left to be discovered is what adjustments will be adopted to make that increase possible.