The Joint Sea Based Logistics ship was envisaged as part of the original MARS (Military Afloat Reach and Sustainability) programme, with 3 such ships planned to be built. The 3 JSBLs vessels were to be part of the “Power Projection” tools envisaged as far back as the SDR 1998: these three ships have the support and resupplying of troops ashore (be it 3rd Commando Brigade or a deployed army force) as mission.
The JSBL ships had to be 3, and were specifically tailored at carrying initial sustainment for the Third Commando Brigade, which means supporting up to four battalions. The SDSR 2010 however reduced the amphibious assault lift capacity, and now only 3 Commando Battalions could be put ashore. The requirement itself for JSBL ships is now likely to have been downsized, if not cancelled because of lack of budget.
The JSBL vessel would have the appropriate capability to enable offload at tempo (in current parlance that means helicopter spots and surface off-load capability) and the space to reconfigure loads as required.


These ships were to form the core of a force that includes the ability to conduct the Operational Maintenance and Repair (OMAR) of aircraft, surface ships and submarines. Conceptually, they will also have the capability to maintain land equipment and will combine with Expeditionary Deployed Port Infrastructure (EDPI), Maritime Intra Theatre Lift (MITL) and Future Landing Craft to allow off-load through any port facility, over a beach or direct to the objective. The Joint Casualty Treatment Ship (JCTS)4 was to provide the Role 3 medical facilities of a field hospital for maritime and early entry forces and fit into the overall medical plan, replacing the capability of RFA Argus. All these capabilities were to be linked by Joint logistic information systems that allow real-time asset tracking.
Now OMAR is on hold, as Diligence has been refitted to live at least to 2016, Argus is also going to serve… as long as possible, and the JSBL is at serious risk of never seeing life.
The original plan for the JSBL ships was ambitious, as everything set out by the SDR 1998. Probably too ambitious, and in any case well past what the Royal Navy will be able to afford with the budget allocated to it in the coming years. The requirements for OMAR, Casualty Treatment and land-forces and logistical support from the sea all still exist, however, and in some way, the Navy will have to adapt its original plans to squeeze as much capability as possible out of the vessels it will, slowly and painfully, manage to fund in the coming decade.
I’ll now explain a possible solution for the JSBL concept, which in a low-cost, unglamorous solution combines as much capabilities as possible and which would also be a close relative of the barge-based OMAR solution already studied and of which I’ve already given evidence above. The JSBL vessel could, in fact, be a barge.
I say this with some confidence coming from the OMAR concept from BVT/Royal Navy studies, from US Navy experience with their own Mobile Landing Platform project and from considerations about what barges can offer. 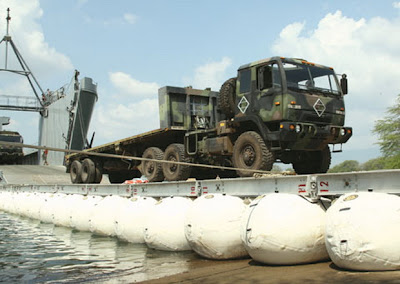 
The barges we will use will be around 30 to 50 meters wide and 130 to 150 meters long. A larger barge would also be possible, with the size constraints being the cargo capacity of the Flo-Flo vessel that will be used to deploy the barge. I’d want the Royal Navy to buy two Flo-Flo vessels at commercial standard, one devoted to carrying the OMAR Forward Ship Repair barge and one to transport the JSBL barge. The barges would be of course compatible with both vessels. A length of 130 meters would make the barge compatible with even more carrying vessels, but while the OMAR could fit, the more ambitious JSBL “mobile base” might not fit overly well in such a constrained size. Width is less of a problem, since Flo-Flo vessels routinely carry loads far larger than their own beam.

If anyone had doubts, now it is official

The UK will use Apache helicopters from HMS Ocean over Libya. Ministers "agreed in principle" yesterday (26 May) to make UK Apache Attack Helicopters available to NATO as part of Operation Unified Protector which aims to protect civilians in Libya under threat of attack.

The Point-class Ro-Ro ships: getting the forces where they must go

Capacity: up 100 tons equally distributed not self-supporting load or container load at 20' /40 positions. The Mafi trailers come from 20 to 62 feet long.

Tare Weight (Tolerance 2% ): Approx. 19 850 lbs (9 000kg)
The MAFI Trailers redistribute deck pressure over a much larger and uniform area, allowing the carriage of heavy loads even on not particularly strengthened decks.

The starboard side ramp, once supported on the pier, gives access to 75 tons loads. The Stern ramp rates up to 85 tons and has been trialed with 92.

1 SUEZ CREW CABINS FOR 6 PERSONS
Total of 39 berths, typical crew 18 to 22. Can be worked with as few as 12 men.
Helicopter facilities
VERTREP AREA; no hangar; no flight deck. Helicopters could be carried as cargo load.
The publication "The Royal Navy Handboook - The definitive MoD Guide" states that a typical vehicle load reaches the 220 vehicles of all types.

Military lift vehicles: Up 8,000 tonnes of vehicles on three decks. Typical mix of about 220 vehicles including Challenger 2 tanks, tracked combat vehicles including Warrior, FV432, Challenger Armoured Repair and Recovery Vehicle, Sabre, Spartan, AS90 self-propelled howitzer and a range of supporting vehicles.
According to Navy Matters, this would include 25 Challenger II tanks, 24 Warrior IFVs, a number of AS90 howitzers, and loads of smaller vehicles and trailers.

The Interim Ro-Ro
The new ships replaced RFA Sea Centurion and RFA Sea Crusader.
A96 Sea Crusader was chartered by the Ministry of Defence (MoD) while under construction at Kawasaki Heavy Industries, Sakaide in Japan. RFA Sea Crusader was launched in 1996 as Celestine, and entered service upon completion in October 1996. She was operated by the Royal Fleet Auxiliary on charter from Cobelfret Ferries, and served as a transport in the Joint Rapid Reaction Force (JRRF) and provide the Navy with the much needed sea lift capability that it has lacked for many years. Her charter expired in October 1998 but was extended until April 1999 to cover for the delayed arrival of her replacement and ultimately worked for the UK until August 2003. She had over 2,300 lane meters available for tanks, armoured transports and other vehicles and has been used for freighting and transport duties between her home port of Marchwood and with British Troops at Split, Thessalonika and elsewhere in the Balkans, especially during Operation Allied Force. Sea Crusader, similarly, was leased from Ocean Arrow in 1998 and returned to the owners in 2002 after providing sterling service in her short career.
NOTES
Source of Point Class data: http://www.fsg-ship.de/archiv/yn_720_mod/
Point Class Ro-Ro brochure: http://www.fsg-ship.de/2product/pdf/roro2700_mil.pdf
They are both very much worth looking into, if you are interested as me in this kind of topics!