A Heavy BCT thus lines:
-          56 M1 Abrams MBTs
-          85 Bradley IFVs
-          14 120 mm Mortar Carriers
-          40 “Heavy Humvee”
-          16 Paladin howitzers (155 mm)
-          2 Sniper sections (10 men each, 3 sniper teams of 3 men – Sniper, Spotter, Security - )
-          Some 870 vehicles of all classes in addition to around 180 armored vehicles from MBTs to M1114 Heavy Humvees
In addition there is an intelligence company, engineer support, NBC recce and the necessary logistic sustainment elements.
A Stryker Brigade Combat Team can count nearly 4000 men and (3850 indicatively), only one between all BCTs, it lines 3 Maneuver Units plus a Cavalry formation, making it the largest kind of BCT in the Army. A Stryker BCT is estimated to mean a load of over 13.300 short tons, and when volumes are kept in consideration, it is estimated that 288 C17 loads are required to transport the formation by air, a feat that the USAF counts to be able to accomplish in 96 hours if needed.
A Stryker brigade has 3 Mechanized Infantry Battalions, each on 3 Companies. Each company has a Direct Fire platoon with 3 Stryker M-1128 Mobile Gun System. The Recce/Cavalry regiment uses armored Humvees and Stryker Recce (variant M-1127, externally practically unrecognizable from the basic APC (M-1126). There is also the Radar troop for battlefield surveillance, drones, and all supporting elements that can be found in all BCTs.
A Stryker brigade comes with an artillery regiment with 3 Batteries, each on 8 M777A2 towed 155 mm howitzers. 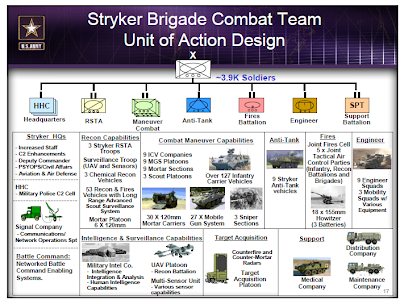 In 2007, the mass-production of the Stryker was ongoing and the unitary price stabilized on an average of 1.42 million dollars each, a very competitive price. The hull offers protection against 14.5 mm rounds on the frontal arc and 12.7 mm rounds all around, and is resistant to 152 mm artillery shrapnel at distance of 10 meters. Add-on armor is available, and includes SRAT (Stryker Reactive Armor Tiles) against RPGs and HPK (Hull Protection Kit) against IEDs and EFPs. Underbelly anti-IED protections, including a V-shaped shield, are being applied. Commonality between the 10 variants is extremely high, and although Strykers are procured and delivered “as they are”, any vehicle of any variant can be converted into another.  All Strykers come with a M151 Protector RWS as standard fit, and they normally have a manned ring mount in the back as fall-back option, normally mounting a 7.62 mm machine gun. The APC variant has a crew of 2 and carries 9 dismounts.
The Infantry Brigade Combat Team consists of approximately 3,242 soldiers and is composed of: 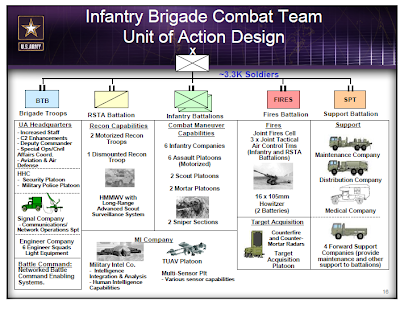 The High Readiness Force will consist of a range of maritime, air and land based units capable of deploying at short notice to meet the requirements of the Defence Planning Assumptions. Such forces enable the UK to react quickly to a range of scenarios that might threaten the UK’s national security interests. These force elements would be capable of operating with allies or where necessary on ‘stand-alone’ UK operations.


The current situation of 12 RA should be the following:

Carter has returned to first principles and asked: what will the army be for?

His answer, intriguingly, is that it will not be for ‘everyday’ use.  He does not believe that Iraq and Afghanistan – enduring operations – should shape the army of the future, for while those operations have both vindicated much and taught much, they are too specific to theatre, type of conflict and political conditions to be of general relevance. Carter believes the army must be an insurance policy for the most difficult operational challenges, not an organization configured for what at any one time appears to be the most likely. The army must give the government genuine options for contingencies it cannot foresee rather than trying to force the square pegs of old structures into the round holes of new operational demands.
Carter believes that such an all-risks insurance policy would first require the army to have a potential ‘warfighting’ capability of such potency that it is a deterrent in itself [see Observation 1] – similar to the classical concept of ‘the fleet in being’. But rather than orderly structures reminiscent of the Cold War, which are neither affordable nor desirable, a looser arrangement of units is needed, trained to a common doctrine and able to combine in a more ad hoc fashion, with the ‘synergy’ created at divisional level and above.

This is a considerable departure from the previous aspirations for five strong, identically configured brigades, each comprising armoured (tank) and armoured reconnaissance regiments, infantry battalions, artillery and engineers, designed to sustain indefinitely a deployment at ‘medium scale’ (like Iraq or Afghanistan). Brigades have become just too big – mini-divisions – believes Carter, with brigade commanders unable to focus sufficiently on either the tactical employment of their troops or the external, ‘political’, aspects of an operation. His concept envisages at least twice as many smaller brigades of up to five major combat units (tank and infantry), with less organic combat support (such as artillery and engineers) than hitherto, or even none at all [see Observation 2]. This increase in ‘first-class’ brigades would be particularly welcome since the future senior command of the army, and the defence staff, would otherwise be built on a perilously narrow ‘one-star’ base [see Observation 3].

[…] Carter vision puts the ‘teeth’ arms – the infantry and the cavalry– firmly centre-stage. One of Napoleon’s generals said of the British infantry that they were the most dangerous in the world, “but fortunately there aren’t many of them”. Carter is determined to keep them at the expense of ‘enablers’ and support units, accepting that contractorization might have to be an option if a deployment runs on. Enablers and supporters could also be transferred to the TA, where the training regime is more suited to mastering complex but narrower tasks, but with perhaps a higher proportion of regulars in the unit than hitherto. [Observation 4]

With all due respect for General Carter, I cannot avoid saying that, in my eyes, this plan is total bull.
Quickly:
-          Observation 1: the beauty of the Army so powerful to scare everyone is undeniable, but it is an illusion, particularly when the regulars are capped at 82.000, the 105 mm howitzers at around 120, the 155 mm self propelled howitzers at 95 and the Main Battle Tanks at just over 200, with perhaps 250 IFVs and perhaps 200 FRES Scout vehicles.
General Carter can suggest a different army concept and structure, but he cannot reverse the cuts nor obtain additional funding, nor buy additional vehicles or get more regulars. When looked at in the right perspective, his observation is nice, but out of reality. What he is going to scare with that force, especially if spread into tiny, unsustainable brigades weak on logistics and artillery?
-          Observation 2: how is he going to form 10 5-elements brigades of tanks and infantry out of 82.000 regulars in 5 tank regiments and 30, if not less, infantry battalions? There are 5 Regiments of tanks (15 squadrons), 5 regiments of Armoured Infantry (15 companies) and only 10 Squadrons on FRES Scout (2 in each RECCE regiment). Is he going to call “brigade” a formation with a “regiment” made up by 1 Challenger II sqn and 1 FRES Scout squadron, plus one enlarged armoured infantry coy and a few battalions of Light Role Infantry? What would such a force ever be able to do?
How does a reduction in Artillery and Combat Support Elements ever justify itself? COIN or State-on-State, you still need artillery. Lots of it. And Logistics, lots of it.
-          Observation 3: not to be offensive or provocative, but please tell me that we aren’t calling large regiments “brigades” and brigades “Divisions” just so we can retain more top brass and badges. PLEASE.
-          Observation 4: again, it is outside reality. This army structure goes straight against the SDSR assumptions, including generally widespread belief that old style state-on-state warfare is not going to be likely nor common in the coming years. Is he really suggesting losing the Royal Engineers to contractors? Paid with which money? Combat Support Elements in the reserve, cut back savagely and pooled, together with artillery, at Divisional level…? Where is the sense of this suggestion? In the ambition of saying “yes, we still deploy divisions!”.
One has to hope that the press is getting it wrong.
Or that Carter’s review is ignored if the press report is correct. More than an insurance policy, Carter’s army structure feels like a paper tiger of regiment-sized brigades and Divisions with insufficient enablers to do their job.
Pubblicato da Gabriele a 12:30 PM