Light Mechanised Infantry and Light Cavalry: the next orphans?


The British Army seems to have dropped the unwieldy "Light Protected Mobility Infantry" definition for the more immediate Light Mechanised Infantry title. But this is the minor of the changes that affect the 6 infantry battalions mounted on Foxhound.
A much greater change of plans regards the structure of these dramatically undersized units: they now have only two Rifle Companies each. The army apparently calls these "Strike Companies", but i'm not really ready to care for general Carter's questionable obsessions.

Notoriously, Army 2020 got around the political imperative of not cutting more than 5 infantry battalions by making all other Light Role and Light Mechanised battalions a lot smaller. The establishment of these units, all  ranks - all trades, is 561 and 581.
A big part of the cut comes from eliminating three rifle platoons: initially, the structure was on three companies of two platoons plus a GPMG Section, but in more recent times the Army has chosen instead to keep the GPMGs grouped up into a traditional Machine Gun platoon and put all 6 remaining rifle platoons in two companies.

The current structure of a Light Mechanised Infantry unit is as follows, exemplified here by 3 SCOTS, The Black Watch:

As can be observed, the other bit of novelty is the conversion of the third Rifle Coy into an ISR Company grouping signals, the intelligence cell, snipers, recce and Javelin missiles.
The Javelin has probably been included in the ISR company because of the value its aiming unit has when used as a battlefield surveillance sensor. 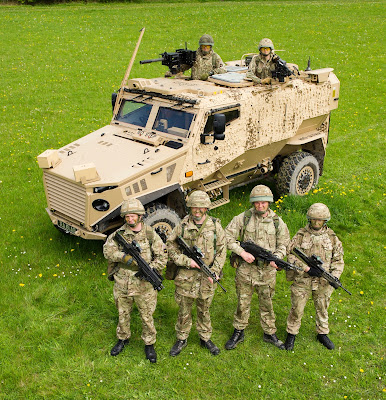 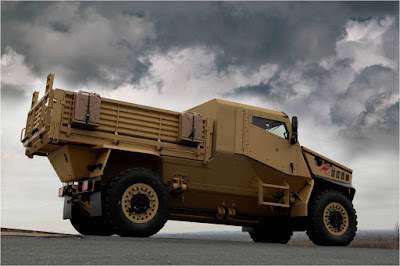 The recce platoons in Army 2020 have been slimmed down, to 24 men. The number of sniper pairs should still be 8. There was the ambition to train all recce infantrymen on the L129A1 to add long range precision firepower, but it is hard to say if this is being done for real or not.
The reconnaissance patrols are usually composed of a 6-man team from Recce platoon plus a Sniper Pair, and four such patrols are generated.
The Anti-Tank platoon has four detachments, led by corporals.

In terms of vehicles, the battalion is currently a mix of many different platforms: the Rifle Companies are mounted in Foxhound vehicles, while Anti-Tank, Machine Gun and Recce ride in RWIMIK +.
The battalion probably employs some Panther too, meaning that, from a logistic point of view, the whole formation is a bit of a mess.
The Mortar Platoon uses the Husky, which is also employed by the REME Light Aid Detachment.
It has to be assumed that the REME are still using the few Husky Recovery vehicles that they created when still deployed in Afghanistan: the army has a requirement for an actual Light Mechanised Recovery Vehicle but so far hasn't yet selected the platform.
Supacat is showcasing at DVD 2016 a Recovery vehicle developed on the Coyote 6x6 chassis, which could be a good solution for the needs of PARA, Marines, Light Cavalry and Light Mechanised Infantry.
Other offers have been made, one of which based on a DURO chassis.

The Army has a Multi Role Vehicle - Protected requirement that should move on in the near future to deliver a few hundred general purpose, protected vehicles and a new protected battlefield ambulance, and this could end up adding yet another vehicle to the roster. According to recent news reports, the Army has been seriously considering the opportunity of selecting the american Joint Light Tactical Vehicle, which, being due for a massive production run of well over 50.000, might be the only contender with a chance to fit the small budget.
I remain personally concerned by the way the MRV-P programme seems to lack a true long-term plan, and clarity about how MRV-P fits within the other fleets and how the number of different vehicles can be cut down to achieve logistic simplification over the coming years. If MRV-P is to be successful, the Army must be prepared to build up its numbers with regular purchases over the years, and make it part of a coherent programme for replacement of old platforms.
The first MRV-P purchases seem destined to replace shares of unprotected support vehicles (Land Rover, Pinzgauer, DURO) in a number of roles and positions across the army, but this must only be a beginning, not a one-off. The army has already started and then abandoned too many programmes, ending up with an endless list of different vehicle types. This time, it must do things differently.

From a Light Mechanised Infantry point of view, the priorities beyond proper, protected Recovery vehicles and ambulance should arguably be the replacement of the RWIMIK +. It is hard to accept that the firepower of the battalion should ride into battle in a platform offering less protection and, probably, somewhat inferior mobility than that of the troop carrier within the rifle companies.
The Foxhound WMIK variant should be brought in to solve the problem, and General Dynamics has been offering other variants of the base Foxhound: this year it is showcasing a SF variant and a C2 command and communications variant that could be a perfect long-term replacement for Panther and beyond.
The Army needs to formulate a plan which, i suggest, would need to capitalize on Foxhound on one side and on MRV-P on the other. The main differences between the two will be protection and cost, with the Foxhound being much better armoured and much more expensive. Over the coming years, the Foxhound, in all its variants, should equip the light units closer to the line of fire, with MRV-P in its variants covering the rest of the requirement, leaving completely unprotected vehicles to the non-frontline jobs.

Light Cavalry regiments, currently 3, are 404 strong and are mounted on Jackal and Coyote. They currently suffer the lack of an adequate light recovery vehicle able to follow the formation and support it right up to the line of fire. Apart from a few Husky "Recovery" created directly by the REME in Afghanistan, they currently have nothing but the gigantic MAN wrecker trucks.
This problem should, however, be solved relatetively soon.

Another problem facing the Light Cavalry is a serious firepower deficit. Javelin aside, the Light Cavalry does not field anything more than Grenade Machine guns (in theory, one in each Troop of four vehicles) and .50 HMGs (on the other three vehicles in the Troop).
This firepower is insufficient to stand up to the threats likely to be encountered, and i'm not talking necessarily about russian reconnaissance formations here, but even of the ubiquitous toyota pick-ups loaded up with heavy weaponry by terrorists and insurgents all around the world.
As the french discovered in Mali, the .50 is at a disadvantage against enemies often armed with the russian 14.5mm gun, not to mention against pick ups armed with the ZSU-23-2 anti-aircraft gun.

The Light Cavalry needs a greater reach and greater lethality in order to be credible. The French in Mali had the Sagaie and AMX-10 to fall back on, and where these were not available they have resurrected old 20mm guns and installed them on the back of trucks, to fight fire with fire.
The US Army, facing much the same considerations, intends to equip its lightweight recce formations with a JLTV variant armed with a 30mm gun derived from the Apache's one.
The russian army is working on an impressive unmanned, enclosed turret with a 30mm gun, installed on top of the Tigr 4x4 protected vehicle.

The Jackal needs to follow the same path if the Light Cavalry is to be credible, otherwise it will be badly outgunned in each and every scenario.

There is a big question mark floating over the british army light forces, however, due to the new Army 2025 plan. At the moment, there is little to no information available about the kind of structure that the six Infantry Brigades will assume. Moreover, there are no details regarding how these brigades will be employed and what kind of capability they will be able to generate.
Light Mechanised Infantry and Light Cavalry were key components of Army 2020, as two "Adaptable" brigades formed around these units were part of the 5-formations cycle needed to support an enduring operation:

Under Army 2025, however, there will be a "greater focus" on one-shot, short duration, Division-level warfighting, and the SDSR 2015 document and successive (few) words offered by general Carter accurately fail to detail whether the army will still be able to support a 5-brigade cycle, making a future enduring operation possible.
When listed:

the elements of Army 2025 seem impressive and more than capable to support a future enduring operation. However, this is actually far from certain, as the Army intends to keep two rather than one brigade at readiness each year (1 armoured and 1 strike).
In addition, 5 infantry battalions will be further maimed to create "Defence Engagement" formations numbering a mere 350 men each. The re-organization of the cavalry regiments might also take away one or two Light Cavalry regiments, depending on the decisions that will be made (four rather than 3 Ajax regiments are envisaged now, and a Cavalry unit might be ordered to change role to CBRN reconnaissance as the capability is given back to the Army).

The insufficient number and consistence of supporting regiments (Signal, Logistic, Artillery, Engineer) makes it unthinkable that more than 5 brigades can be adequately resourced for deployment, which means having, at best, one deployable Infantry Brigade out of the six planned. Maybe not even that.
This risks turning the Light Cavalry and Light Mechanised Infantry into orphaned capabilities, lost somewhere within a force structure that makes little sense and that seems unable to properly, fully exploit the resources already paid for.