The mystery of "Protector" - UPDATE


SDSR 2015 – Issues, analysis and recommendations going towards the review

Royal Navy and the SDSR
Beyond Harpoon and Storm Shadow (and Tomahawk too…?


David Cameron announces that the RAF will replace its current fleet of 10 Reaper with 20 or more of a new RPAS, named the "Protector".
No further details are given about what vehicle will serve as base for the RAF's Protector, not how long it will take for it to enter service. Probably, not before 2019, as that is the current end date for funding for the Reaper fleet.

Hundreds of millions of pounds will also be spent buying a new generation of drones to replace the RAF Reapers currently flying missions in Syria and Iraq.

The new Protector drones will be able to fly longer distances, are quieter and can carry more sophisticated weapons and equipment.

Mr Cameron said: “We have at the moment a drone fleet of 10 Reapers and what we are going to be doing is actually replacing that with twice as many with a new updated piece of equipment - called Protector - which will be more than doubling of our fleet to keep us safe and to give us the intelligence and information and potentially give us the capacity to hit people who are potentially planning to hit us.”

The RAF has had for quite a few years the SCAVENGER programme, an initiative dealing with the general requirement for future deep and persistent ISTAR and precision strike capability.
SCAVENGER is the ISTAR and Strike requirement as a whole, so it includes the platform and the ISR analysis and dissemination back-end.
Already early on in the programme it became clear and accepted that the platform would be a Medium Altitude, Long Endurance (MALE) remotely piloted air system (RPAS), so in the general class of the current Reaper.

Since 2010, a number of key decisions were made: stealth would not be required for this project; flexibility would. In 2012, the RAF declared its interest for a modular solution based on common pods which, once aerodynamically cleared and integrated, would be used to house different payloads and sensors over the life of the system, to save money on the ever increasing integration and certification costs.

The requirement for sensors was also kept deliberately "vague". Full Motion Video, EO/IR and SIGINT are all required, but, at least initially, there was no indication about a specific sensor being required, leaving industry free to come up with proposals.

Another wish expressed was the reduction of the manpower requirement and the standardization of the Ground Control Stations across the wider ISTAR fleet, from Scavenger to Watchkeeper.

For a while, the new platform was seen as coming from a joint UK-France development programme which took the name TELEMOS. A Memorandum of Understanding was signed in March 2011, and BAE and Dassault began planning for the following phases.
Telemos, it was expected, would be based on the twin-engined BAE Mantis prototyp, so would be able to fly between 29 and 36 hours depending on the weapons load; would have six underwing pylons and a further payload station under the fuselage and carry an EO/IR turret and radar.

TELEMOS, however, collapsed in July 2012, when France failed to committ to the programme, eventually joining, a few months ago, the tri-national "European MALE 2020" project with Germany and Italy.

With the collapse of TELEMOS, silence descended over Scavenger. The programme, which supposedly had a 1 billion pounds funding line in the 10-year equipment programme, was looking at purchasing up to 30 RPAS, of which 20 operational and 10 back up and attrition replacements.

Work has evidently continued behind the curtain of silence, and Protector is likely to be the current answer to the requirement. But what platform will "Protector" be? It is not known, at the moment.

Can the UK continue the development of Mantis on its own, without a partner?

Will the UK seek to joint the MALE 2020 project? This looks quite unlikely, also because the MALE 2020 programme is not progressing as hoped, frictions have already become evident between the partners, Airbus has already threatened to leave and the french minister of defence has surprised everyone saying that the new MALE will not be armed.

Reaper might actually be the successor of itself, as its development in recent years has continued apace in the US. The new Block 5 is described as offering increased electrical power, secure communications, automated landing capability to reduce the manpower requirement, increased gross takeoff weight, streamlined payload integration capabilities, safer BRU-71 bomb racks which release the weapons pneumatically and not pyrotechnically, a redesigned avionics bay and digital electronic engine control system plus updated software which allows the 2-man crew to control every onboard system from the GCS.

Block 5 has a high-capacity starter generator and upgraded electrical system with a backup generator that can support all flight-critical functions. The drone has three independent power sources to accommodate new communications such as the newly installed additional dual ARC-210 VHF/UHF radio with wingtip antennas for simultaneous communications among multiple air-to-air and air-to-ground parties; secure data links; and an increased data transmission capacity. The Reaper Block 5 can carry heavier payloads or additional fuel.
Depending on the payload, endurance goes from 14 to 27 hours.

The Extended Range kit, already in USAF use, is a field-retrofittable modification introducing two external, non-droppable fuel tanks, but this requires the sacrifice of part of the weapon carrying capability, as two pylons are taken up.
To increase thrust and improve takeoff performance at higher gross weights, an alcohol/water injection system and a four-bladed propeller are added, along with a heavyweight trailing arm landing gear system that enables safe ground operations at the heavier gross weight. Endurance goes well above the 30 hours mark in a weapon-less configuration. 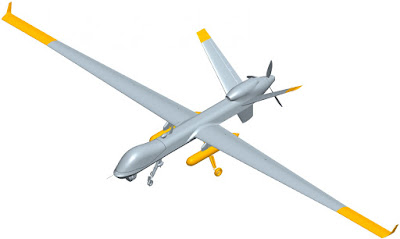 The "Long Wing" ER kit replaces the current 66 feet wing with a 79 feet wing with winglets and additional fuel, giving greater endurance stretching above 40 hours (without weapons).
The long wing will be integral to "certifiable Predator B", a development of the Block 5 including Detect and Avoid capability and compliance with U.S. and NATO flight certification standards, including the
UK DEFSTAN 00-970.

Being able to certify the Reaper / Protector for flight in british airspace will be extremely important. It is worth remembering that, as of today, the RAF's Reaper has never flown in the UK skies, nor is planned to ever do so. Currently, the whole fleet is based abroad and flown operationally, but before the deployment against ISIS, the fleet was destined to be dismantled, put back in the shipping containers, and stored at RAF Waddington with the crews maintaining their skills only through simulation and training at Holloman AFB, in the US. It is to be hoped that Protector will not suffer the same kind of limitations.

Work on Detect and Avoid capability needed to secure certification for unrestricted access to the civilian air space is ongoing, with the aim of producing certifiable Reapers in 2018. The Reaper has been flight tested in the US with a detect and avoid sensor package already in late 2014 and next year the system should be obtain certification by the US Federal Aviation Administration.
The system combines a General Atomics’ “due regard” electronically scanned radar, a Honeywell traffic alert collision avoidance system (Tcas) processor and a BAE Systems Identification Friend or Foe transponder that work together to detect and track other aircraft. General Atomics Aeronautical Systems has been working on it since 2011.

The Reaper has also been trialed and demonstrated with a variety of payloads, including SEASPRAY 7500E multimode AESA radar (in 2012), with the DB110 reconnaissance optical sensor (which is the base of the RAPTOR pod used on Tornado GR4) as far back as 2005, and will be integrated soon with the Reccelite reconnaissance pod (an italian request). In the US, the Reaper employs the Gorgon Stare wide-area full motion video surveillance system, and has been demonstrated with other payloads such as the PANDORA pod for Electronic Warfare attack.

In terms of weapons, on british request, the Reaper has successfully test fired Brimstone 2 missiles. Trials with the Paveway IV are being considered.
This would enable the replacement of the GBU-12 and Hellfire currently used on the RAF Reapers, which have to be procured specifically (they aren't otherwise used on other RAF platforms. The Hellfire purchased are the high-altitude launch variant so they can't be shared with the Apache fleet of the army either).

The Reaper, in other words, does offer some readily available solutions for improvement and capability expansion, which make it a credible candidate for serving as the base for the Protector.
A certifiable, long-wing, Block 5 Reaper with Brimstone 2 and Paveway IV is my best guess for Protector's identity.

The Mantis is a fascinating possibility, but needs a lot of work to catch up and move from being a prototype to being a fully functional RPAS which can replace the Reaper in the relatively near term (2019 - 2020: 3-4 years aren't much, in this kind of projects).

Other alternatives do not appear realistic. Italy is developing in house the P1HH Hammerhead, a Piaggio P-180 twin-engine executive turned into a MALE. Italy has already ordered 3 systems, comprising of 2 RPAS each, to replace its Predator MQ-1s RPAS and complement the Reapers until these get replaced by the European MALE 2020.
The Hammerhead can be armed on two external pylons and in an internal weapon bay, but that part of the design is still in early stages and availability might not be immediate.
Honestly, i don't think the UK is interested. Although at this stage we can only make guesses.

Other options are not evident. Excluding Russian and Chinese products, all that is left is Israel. The israeli product responding best to the (very generic) description given by Cameron and the MOD is the armed variant of the Heron TP, which has been recently ordered by India.

Jane's guess is that the UK might be interested in an armed development of the Hermes 900, the "big brother" of the Hermes 450 which is the base of the Royal Artillery's Watchkeeper. Personally, i would think that both Heron and Hermes are unlikely picks, but, again, i'm just guessing.

Sky News reports that Protector will come from the US, but there's no telling if they are guessing or if they are certain about that.

The surprise announcement about "Protector", for now, is exceptionally poor of details.

Air Commodore Peter Grinsted, Head of UK Unmanned Air Systems has spoken today at the RPAS 2015 conference held by the Royal Aeronautical Society in London, and he has provided the first indications about Protector, and it seems that my forecast was remarkably accurate:

-          It is indeed the platform selected within the Scavenger requirement

-          It will be built, unlike the current Reaper, to fly in civilian airspace, so we can take this as a confirmation of Detect and Avoid and of the other “Certifiable Reaper” features

-          The configuration for Protector is to only be firmed up in March 2016 (I guess that’s the expected Main Gate date), but it will be an upgraded Reaper system. Integration of british weaponry remains, in my opinion, likely for obvious long-term considerations.