I won't call the T-14 Armata a "revolution". It might be excessive to do so. But it sure is an evolution of the concept of Main Battle Tank, and promises to have several interesting features.Observation of the close-up photos coming from Moscow, however, leaves little doubt in me about the current models being prototypes, and incomplete as well. The external shield of the turret, and much of the sensors in it, appear to be representative mock-ups only. When seen from close by, the outer layer of the turret is seen to be a very thin metal sheet, which has also been assembled in a not too brilliant way. 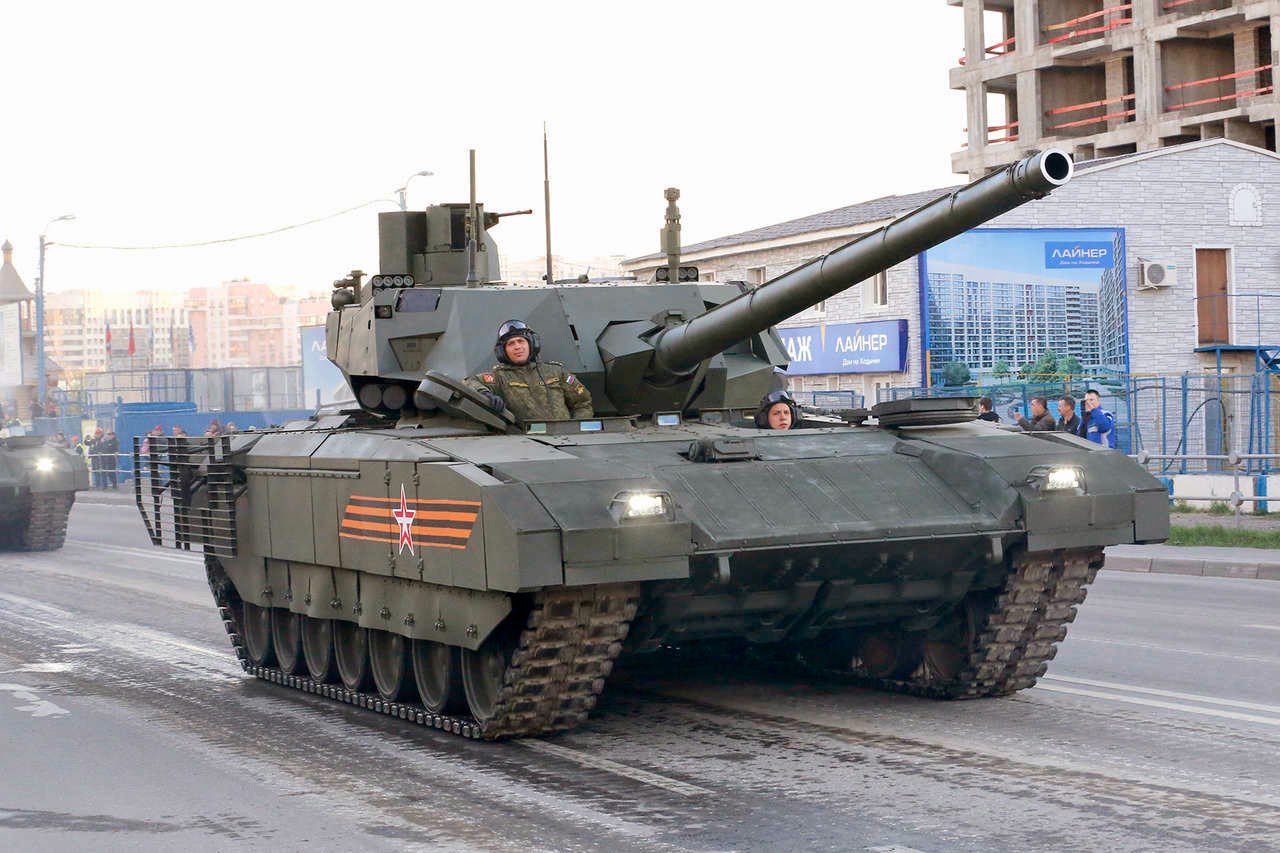 The Armata project is not "just" about a new MBT, but about delivering a solid common base hull which will be produced in many different variants to cover multiple roles. At the Moscow parade we see the MBT (T-14) and the heavy IFV (T-15); but it is expected that engineer, fire support and possibly even a self propelled howitzer variants will follow. Specifically, a contract has been signed recently to build prototypes of new breaching and mine-clearing vehicles, to be trialed in 2017, which will eventually replace the current armoured bulldozer IMR-3 (on T-90 chassis) and BAT-M and BAT 2 combat engineer tractors. It is thought that these new vehicles will be based on Armata. The self-propelled howitzer should use the Koalitsya unmanned, automated 152mm howitzer turret on Armata hull. At the moment, the Koalitsya can be seen at the parade installed on a T-90 chassis (with six wheels, Armata has 7), with a heavily modified hull with all three members of the crew sitting in the front. It is not entirely clear if a move to a pure Armata base is still envisaged.
Another variant suggested is a new BMPT Terminator tank-support vehicle. The BMPT, based on the T-72 chassis, was proposed to the russian army, but rejected due to its elderly base vehicle. It is thought, but at this point it is hard to separate facts from speculation and fantasies, that such a fire support vehicle variant, based on Armata, will instead be procured, as the russian army endorses the idea, just not the mechanical base.

Another variant is the BMO-2, a proposal by industry aimed at replacing the heavy APC BMO-T, basically a T-72 which has swapped the turret for an armoured "box" especially thought to carry, under thick armour protection, a team of up to 7 soldiers armed with RPO thermobaric / incendiary rockets (classed as "flamethrowers" by the russian army). These specialised support teams can force the enemy out of buildings and strongholds very quickly. In the industry brochure about the proposed BMO-2, the Armata derived vehicle is armed with a large remotely operated turret with a 30 mm gun and two boxes of rockets, for 24 rounds which can be fired from under armour.

In the next few years, in short, we could see several further developments of the Armata base. The T-14 is earmarked as replacement for the old MBTs currently in service, and the T-15 should equip the infantry battalions within Tank Brigades. These will thus become very heavy formations, with the infantry riding into battle with MBT-like protection.
The more numerous motorised infantry brigades will instead receive the new Kurganets-25 IFV, another whole new tracked design, lighter than T-15 (but armed in the exact same way) and with full amphibious capability; and the new Bumerang, an 8x8 IFV also fully amphibious.

The T-15, Kurganets and Bumerang, in their IFV variants, all share the Epoch-Almaty unmanned, remotely operated turret, armed with a 30mm gun with coaxial 7.62 machine gun and with two twin pods of Kornet anti-tank missiles.
The Kurganets-25 and Bumerang also have a lighter armed APC incarnation, with a smaller RWS with heavy machine gun (12.7 mm, it would seem, but 14.5 might follow). Many more variants can be expected if the plan to replace the BMPs, BTRs and supporting vehicles with these new products will go ahead.

The T-14's evolutionary aspect comes from having the crew all in the hull, inside a safety cell well protected on all sides. The turret is unmanned. However, it is suspected that the autoloader system has an architecture similar to the carousel on the T-72, and this could still be a major weak point, compared to the sealed ammunition compartments with blow-out panels used on other modern tanks. The autoloader's shape and the protection of the ammunition stock from catastrophic failure is one key factor to judge the Armata's true evolutionary potential, and there aren't yet good answers.

Another key element of the T-14 and T-15 is the new Active Protection System, reportedly known as Afganit. This should use a variety of sensors, mainly radar, to detect incoming missiles and even APFSDS darts, and counter them with soft and even hard kill ammunition. The intended position of the Afganit's radar antennas are visible in the T-14's turret, but close observation suggests that what we are seeing now is just demonstrative material.

The Armata's turret is apparently composed by a "core" tower containing the main and coaxial gun and related weapon sight. On top, there's the panoramic sight, with high elevation machine gun RWS. But all around this, there's a modular outer shield, comprising also a significant extension to the rear, which could contain additional systems.
The observation of photos coming from Moscow, however, shows that, at the moment, the outer shell is just a very thin sheet of metal. The radar arrays and some of the sensors also seem to be only mock ups. This suggests that development of this part of the tank is still ongoing, and thus what we see might not be exactly like the finished product.

Earlier concept art and at least one industry model seen in 2012 suggested that the T-14 would also be armed with one or two light guns (a 30 mm autocannon and a gatling machine gun in the 2012 model). These do not currently appear on the tank, but there is a possibility that the module sticking out of the rear of the turret could contain the ammunition and hold one or two guns in elevable pods at the sides.


As the top image shows, there is a large maintenance hatch on top of the tower. More interesting, the Afganit APS includes substantial banks of smoke grenades and other munitions, including a large number apparently meant for vertical launch. The exact purpose and employment method can only be guessed: supposedly, Afganit should intercept top attack munitions as well. Curiously, the photos seen so far show that the rear of the tank has no evident APS coverage.

The T-14 Armata, at least for the moment, has a 125mm gun. It is not clear, however, if Russia has effectively abandoned the 152mm gun it has been experimenting for years, or if it might be adopted later. The main drawback of the gigantic 152mm is the huge size of the ammunition. If a fully automated system is not as concerned as a human loader by the weight and bulk of the shells it moves, it is still true that the sheer massiveness of the projectiles inexorably means carrying fewer rounds.

The heavy AFV modernisation of the russian army is certainly impressive, especially when we add in the Kurganets-25 and the Bumerang. The airborne troops are also receiving new equipment, namely the airdroppable IFV BMD-4M and the Rakushka airdroppable APC, which preserve the exceptional level of mechanisation of the russian paras.
The 2S25 Sprut-SD airdroppable tank seems to have been substantially abandoned. 24 were procured, but it was found to have significant flaws. However, the Paratroopers will still have a 125mm tank which can be parachuted into action, as a contract has been signed to design a successor to the Sprut, based on the BMD-4M instead of on BMD-3.